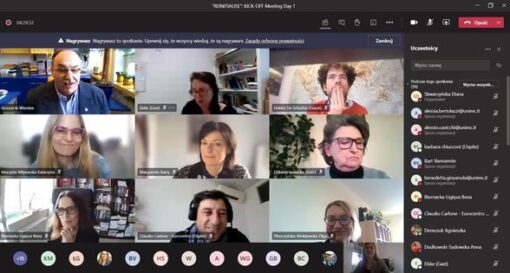 During the meeting, particular Work Packages of the project were discussed, Leaders of the Work Packages and Tasks were appointed, plans for upcoming activities, i.e. academic symposia, visual identification of the project, or the creation of the Knowlegde Platfrom – a place where scientists from different countries and within different scientific disciplines will share their knowledge and experience were discussed.

The meeting was attended by more than 30 people, including researchers from Partners’ institutions: University of Macerata, KU Leuven and Eurocentro, representatives of the Innovation Board: Marzena Strok-Sadło from the Lublin City Hall, Małgorzata Brodzicka from the Marshal’s Office Elżbieta Iwanicka from the Free Polish University Society and Lukasz Gołąbek from Netrix Ventures as well as external members of the Scientific Board:

We use cookies on our website to give you the most relevant experience by remembering your preferences and repeat visits. By clicking “Accept”, you consent to the use of ALL the cookies.
Do not sell my personal information.
Cookie settingsACCEPT
Manage consent

This website uses cookies to improve your experience while you navigate through the website. Out of these, the cookies that are categorized as necessary are stored on your browser as they are essential for the working of basic functionalities of the website. We also use third-party cookies that help us analyze and understand how you use this website. These cookies will be stored in your browser only with your consent. You also have the option to opt-out of these cookies. But opting out of some of these cookies may affect your browsing experience.
Necessary Always Enabled

Performance cookies are used to understand and analyze the key performance indexes of the website which helps in delivering a better user experience for the visitors.

Analytical cookies are used to understand how visitors interact with the website. These cookies help provide information on metrics the number of visitors, bounce rate, traffic source, etc.

Advertisement cookies are used to provide visitors with relevant ads and marketing campaigns. These cookies track visitors across websites and collect information to provide customized ads.

Other uncategorized cookies are those that are being analyzed and have not been classified into a category as yet.